Distribution Centers in the Inland Empire: Space hard to find, but more development is predicted

In a previous blog post, we discussed the Southern California warehouse market.  In this post, we want to focus on the Inland Empire region – the logistics hub of Southern California. Located about 50 miles east of Los Angeles, the region has 1.1 billion square feet of warehouse space. The traditional strength of the Inland Empire has been its access to the nation’s largest port complex in Los Angeles-Long Beach.

Importers choose the Inland Empire for import distribution operations because:

Although trucking and other transportation costs to move products to Inland Empire distribution centers are higher, they are more than offset by the savings in labor, land and rents.

That said, space is becoming harder to find in the Inland Empire, particularly large distribution centers of 500,000 square feet or more.  Property that became vacant during the 2008-2009 recession has largely been reabsorbed.  The current vacancy rate is hovering around 6%, down from about 9% in 2009. 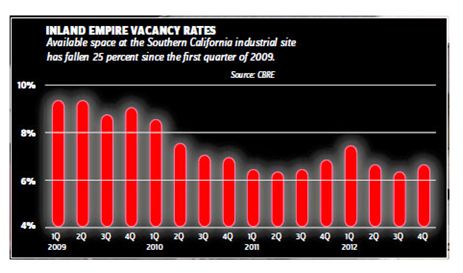 No, there are deals to be had.  For example, Weber Logistics, which operates 7 large Inland Empire distribution centers, was recently able to lease, implement, and go-live on a new 330,000 square foot DC within 45 days.

But continued property development will be required to meet a growing demand for space and, according to Blaine Kelly of commercial real estate giant CBRE, developers are back in the market.  He says plans have been announced for construction of about a dozen large facilities on speculation in the Inland Empire.

Factors fueling this speculative growth include:

Whether it’s eCommerce or traditional distribution operations, the Inland Empire will continue to be a distribution location of choice for many years.  Weber first established a presence in the Inland Empire over 20 years ago, making us one of the first third party logistics providers to locate in the region.  Feel free to email us with any questions about Inland Empire warehouse space, or post a comment.