Real estate investment firm Jones Lange LaSalle just came out with its Fall 2013 “Big Box Velocity Index.”  It measures both building activity and demand for industrial warehouse space across the U.S.   The report suggests the economy is rebounding, with demand for warehouses strong across the country, especially for buildings over 500,000 square feet.  According to the report, the overall industrial vacancy rate is the lowest since the 2nd quarter of 2008. 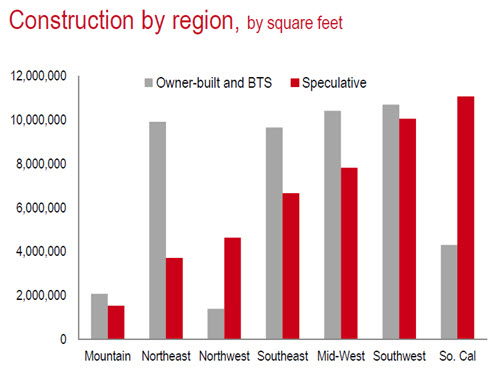 Real estate developers have done their research and are clearly confident that the Inland Empire will continue to be a distribution hub of choice for the foreseeable future.  This active investment is being made despite talk that nearshoring and the Panama Canal expansion will draw goods away from Southern California ports, and therefore away from nearby distribution warehouses.

Here’s why we feel that is unlikely:

Another interesting finding from the Big Box Velocity Index is the fact that Phoenix tops the list of 2nd tier markets where demand for warehouse space exceeds current supply.   Weber operates a Phoenix warehouse and freight terminal for our temperature controlled LTL delivery network.

Numbers from the Big Box Velocity Index indicate a growing economy, and that Inland Empire commercial warehouse development is continuing at an aggressive pace.