The Latest on West Coast Ports: One Year Since Labor Negotiations Began 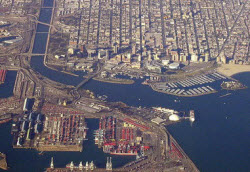 Nearly one year has passed since labor negotiations began in May 2014 between the Pacific Maritime Association and International Longshore and Warehouse Union. On February 20, 2015 they came to a tentative 5 year agreement. The ILWU membership voted on their tentative agreement May 22 and approved the contract. The five year contract, which is retroactive to July 1, 2014, will expire on July 1, 2019.

Looking back a year ago before the negotiations, teamsters picketing, chassis shortage and increased volumes… there was a standard “normal” in efficiencies. Vessel, yard and gate operations have been improving in recent weeks, yet have not returned to normal. Recent articles by the JOC discuss the expectations and challenges of the West Coast ports now and in the near future which can be summarized below:

Is getting back to "normal" a good thing?

Yes. Getting back to that “normal” is great because it means the ports are on the road to recovery. Since last fall there has been extreme congestion and backlog with a peak of 28 vessels at anchor waiting for a birth to open up. The Marine Exchange of Southern California reported, there were no vessels anchored for many days this month, which is a great sign of recovery. Part of this is due to the increase in ILWU man-hours, which were much higher in April, compared to last year. The terminals added around 60,000 man hours according to the PMA to clear the back log.