California’s Central Valley consists of all or part of 19 counties in the center of the state – extending from Bakersfield in the South up near Redding in the north.  It’s home to the state capitol of Sacramento, and is one of the most productive agricultural regions in the world.  In addition to “the Big Tomato” (one of Sacramento’s many nicknames) and the over 230 crops grown in the Valley (tomatoes included), the Central Valley is home to a burgeoning logistics industry.

In fact, when it comes to balancing location and cost, Central Valley logistics offers a combination of the two that is unparalleled on the West Coast. 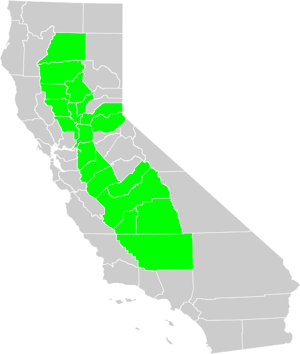 In California, the Bay Area is booming.  San Jose and San Francisco are currently ranked #1 and #2, respectively, as the strongest economies in the U.S. according to Business Insider.  Located just east of the Bay Area, the Central Valley provides an ideal location for serving this key market but without the high costs of warehousing within its borders (more on these costs in a moment).

And, it’s not just the Bay Area that the Valley is positioned optimally to serve.  As the Central Valley is located in the central-to-northern part of California, it’s nearly smack dab in the middle of the entire West Coast.  From a Central Valley warehouse, a company’s OTR distribution operations can reach down to Los Angeles, the entire state of Nevada, and up to the Pacific Northwest within a single day.

The Central Valley is also within 70 miles of the Port of Oakland – the 10th busiest port in the U.S.  With truck turn times averaging 60-90 minutes, drayage operations can receive your goods and get them back to the Central Valley quickly for warehousing and distribution.  And, speaking of Ports, the Valley is also home to the Port of Stockton – a major deepwater inland port that just had its best year on record in 2017.

While the Central Valley is a geographically advantageous location for just about any West Coast logistics operation, it’s the area’s comparative warehousing and industrial costs that truly reveal its value as a logistics hub.

According to Cushman & Wakefield, industrial rents for existing space in the Valley average $0.35 per square foot (psf) as of Q1 2018.  In the Bay Area, rent averages over $1.00 psf. This stark price difference often leaves companies asking themselves, “why would I spend $0.65 per square foot more to rent space within the Bay Area when I can save that money and reach that market just as easily from the Valley?”  The answer more and more frequently appears to be…well, silence.

Like the Inland Empire east of Los Angeles (which is currently $0.64 psf), much of the Central Valley’s space is newer construction with modern amenities.  But, unlike the Inland Empire, the Central Valley has seemingly unlimited room to expand.   In fact, 10 million square feet of industrial space is currently under construction within the Valley.  The fact that almost half of this new space is already spoken for, however, shows that this region is no longer a “best-kept secret.”

Manufacturing and eCommerce companies, especially, are looking to the Valley for ample and affordable warehouse space.  Amazon, for instance, is now the largest employer in San Joaquin County – one of the Central Valley’s most populated areas.

Another sizable presence that has already established a strong foothold in the Valley are third-party logistics companies like Weber Logistics.  Here at Weber, we recognized the logistics value of this region long before the Bay Area boom and its high costs made companies begin to look East.  Our Stockton warehouses offer climate-controlled warehousing, drayage, and full transportation capabilities that include trucking throughout California and the West Coast, with next-day service to California, Arizona and Nevada.

To learn more about how your business can benefit from the location and cost-savings of Central Valley logistics, contact us today.