If you’ve been following operations at the Ports of Los Angeles and Long Beach in recent years, the trend looks something like this: the Ports continually break new volume records, truck turn times remain high, and officials vow to speed things up.  The calls for speed reached a fever pitch in Q1 of this year as freight piled up at the Ports in the wake of U.S.-China tariff announcements.  Fortunately for shippers, enhancements are in place to speed container drayage in Los Angeles and Long Beach now and in the future.

Enhancement #1: Automation at the Ports 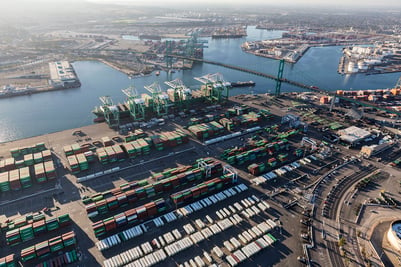 Automation in the form of driverless cargo carriers had previously been implemented for two smaller terminals at the Ports in the past 18 months.  This summer, however, the implementation of this automation led to a major battle between unionized workers and the Ports over automation at the Maersk-owned APM terminal at the Port of Los Angeles.

It was announced that APM – the largest terminal in the U.S. – was going to roll out robotic cargo carriers that move containers from ships to trucks.  There are eventually expected to be 130 of these machines at the terminal, controlled via WiFi by a small staff of workers.

The longshore union cried foul and sought to block the use of these potentially job-killing machines at the terminal.  Local officials were soon involved, and a political battle ensued.  In the end, APM’s plans proceeded, with APM agreeing to pay for job training for 900 unionized workers.  450 of these employees will be ‘upskilled’ to learn how to use the new equipment, while the other 450 will be ‘reskilled’ for new positions at the port.

Now that the battle has subsided, the takeaway for shippers and logistics professionals is that improved speed can be expected at the automated terminals.  The robotic machines can work 24-hours-a-day, compared to the 16 hours of work currently performed by dockworkers.  This increased productivity is expected to reduce turn times at the terminal from 105 minutes to 35 minutes.  Drayage drivers can then receive shipments and move them off the ports faster.

New ‘green’ benefits are also expected.  The automated carriers will be fully electric instead of diesel-electric and will greatly reduce truck miles within the port.  According to the Los Angeles Times, “rather than drive around the terminal’s 26 miles of road, the trucks would park outside the container storage yard and the robotic carriers would bring the cargo to them.”  This is also important for initiatives such as the Clean Air Action Plan of the Ports of Los Angeles and Long Beach, which aims to eliminate emissions from handling equipment completely by 2030.

Another way to speed container drayage in Los Angeles and Long Beach is to lean more heavily on rail.  Recently announced enhancements at both ports will make it easier for companies to do just that.

In October 2018, the Port of Los Angeles announced its Terminal Island Railyard Enhancement Project.  The $34 million project will improve rail operations at the port through the following:

Not to be outdone, the Port of Long Beach has its own rail-based plan in the works.  The Pier B On-Dock Rail Project will improve speed and efficiency through the following:

One of the major gripes about container drayage at the Ports of Los Angeles and Long Beach has centered on a lack of visibility into shipments.  The Port OptimizerTM portal, developed by GE, aims to rectify the situation.  The system – currently used by 9 of the top 11 shipping lines that call upon the Ports – provides BCOs, logistics companies and other stakeholders with real-time visibility into the status of containers.  This includes real-time alerts when a container is delayed.

This information enables trucking companies to know exactly when freight arrives and is ready for receiving, thereby eliminating the guessing (and waiting) game that has been the norm for ages.  This, in turn, reduces truck turn times at the port while ensuring that all stakeholders are aware of the cargo’s every move.

Lean on expert 3PLs to navigate the ports

While these new enhancements certainly provide good news to shippers looking to speed operations, a substantial piece of the ‘speed puzzle’ involves choosing the right logistics partner to begin with.  Third-party logistics (3PL) providers such as Weber Logistics live and breathe container drayage and other port services at the Los Angeles and Long Beach terminals day-in and day-out.  This earned expertise can prove to be invaluable in navigating complex port operations and getting your goods to market quickly.  To learn more about Weber’s West Coast logistics capabilities – which includes a fully-integrated approach to drayage, warehousing and transportation – contact us today.