When shipping freight into California, or anywhere in the U.S. for that matter, you may feel that you’re leaping over one hurdle after another to deliver your goods to market. The current California port congestion crisis is one of the biggest hurdles right now. In this article, we’ll examine why the current freight system congestion is so severe, and why it’s lasted so long.

When COVID-19 shut down most of the world in March 2020, shipments from Asia to the U.S. ground to a halt. Shipping eventually did resume later in the Spring, but it did so at a greatly accelerated pace. Very soon, the incoming container volumes overwhelmed the Ports of Los Angeles and Long Beach, as well as the Port of Oakland and nearly every other seaport in the U.S. It’s a situation that – despite brief periods of relief – has only worsened over time. 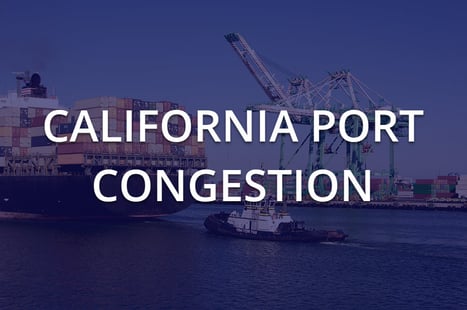 The following is a detailed illustration of California port congestion and the related hurdles that shippers and supply chain professionals continue to face.

Hurdle #1: Ocean vessels must wait outside the Ports. As the ports became congested, ships had to anchor offshore and wait for their turns to be unloaded. The pace of new ship arrivals has been quicker than the pace of unloading, so the number of ships at anchor has only increased. As of late September, 2021 there is an average of 60 vessels – and as many as 73 – at anchor outside the Ports of L.A. and Long Beach, while approximately 20 ships are unloaded at the Ports’ terminals each day.

To put this in context, prior to the pandemic it was rare for more than one ship to wait off port.

The most discouraging part of this heading into Q4 is that the number of ships waiting off port is only growing. Elsewhere on the Coast, the Ports of Oakland and Seattle have their own congestion issues and are not equipped to handle volumes like L.A. and Long Beach are experiencing.

Hurdle #2: Congestion at terminals means slow unloading. Once your vessel arrives at one of the terminals at the Ports of L.A. and Long Beach, you are confronted with a host of new delays.

For starters, offloading containers is a time-consuming process. There is a finite number of dock workers and equipment to perform the unloading. These dock workers are doing the best that they can, but there are only so many workers who can work so many hours. Additionally, workers can be forced out of rotation due to illness and/or COVID-related protocols. There simply aren’t replacements standing by. Crane operators, for example, must undergo a rigorous training program – it’s not a position that can be filled quickly.

There is also only so much room at the terminals to place containers once they are unloaded. Due to myriad factors – driver and chassis shortages (more on these items below), congestion getting into and out of the terminals (and resultant missed appointments), and even companies flat out abandoning their cargo – containers are piling up at the ports and vessel unloading is delayed. As a result, average container dwell time is now a whopping 6 days at the Ports of L.A. and Long Beach.

Hurdle #3: There aren’t enough chassis to transport the containers. After clearing the first two hurdles and getting containers off the ship and onto the terminal dock, you might begin to think you’re in the clear. You would be wrong. The shortage of chassis that began in 2020 has become an even larger problem in 2021.

Earlier this year, we detailed the chassis pool challenges at the Ports of L.A. and Long Beach, which have three main causes.

Importantly, the chassis problem also exists at the Port of Oakland and at other ports nationwide. The problem is so severe that even companies that pay extra for express service with ocean carriers (in which a carrier guarantees a chassis) are not able to secure a chassis on the landside.

Hurdle #4: The drayage driver shortage is still very real. Even with the container offloaded and a chassis procured, your distribution process could still be stalled. The reason: there aren’t enough drayage drivers to meet the demand.

Just like dock workers and crane operators, there are only so many drivers that can handle the current surplus of container freight. These drivers must stick to Hours of Service (HOS) regulations which limit the amount of time they can be behind the wheel without rest. Also, like dock workers, drivers have been hit hard at times by COVID-related illness and family responsibilities.

Industry competition is also a factor, as bigger carriers are able to offer huge signing bonuses and substantially higher wages to lure drivers away from their current positions. Sometimes this just means that a drayage driver leaves one drayage provider for another. Other times, it means that drayage drivers are scooped up by large carriers to perform LTL, TL, and other non-drayage work – further depleting the pool of available drayage drivers.

For a more detailed examination of the issue, check out our recent article on reasons for the driver shortage.

Hurdle #5: Warehouses are backed up. So, you have had your containers unloaded, you’ve secured a chassis and a driver to transport the container. Surely, now your goods are on the move, right? Not so fast. Where are you going to unload your container?

If the answer is that you’re going to dray it to a warehouse near the Ports, this may be a bit more of a headache than anticipated. Warehouses are backed up as well.

Most warehouses within a reasonable drayage haul from California ports – especially those in the Inland Empire – are full. Their parking lots and overflow lots are full as well. This means that there are warehouse yards full of containers and chassis waiting for outgoing product to clear up space inside. Until the space clears up, those containers and chassis are out of commission and can’t be returned to the port, which compounds the congestion further up the supply chain.

Port congestion continues to hit shippers in the wallet

In addition to time (which, of course, is money), every step of the supply chain is costing you money. Other than chassis pools, whose fees have held steady as they are only raised once a year, the following cost increases further contextualize the magnitude of the congestion problem:

To help alleviate some of the disruption, the Federal government has stepped in to work with the Ports of L.A. and Long Beach to expand gate hours and encourage 24/7 operations.

While this is a positive step, will such measures significantly curb congestion? There are still pressing issues that will not be resolved by expanded hours of operation alone.

Or, if the waiting time associated with any of those steps is so long that the driver misses a subsequent scheduled appointment, the driver will be out of luck and have to start the process again.

Then there is the issue of extended-hour operations outside of the port. For extended hours to really make a dent in the congestion, that would mean that warehouses, warehouse workers, drayage drivers, and regional drivers (to move freight from warehouse to final destination) would all need to be operational around the clock to support freight coming from the Ports. It just may not be realistic, especially in light of worker shortages throughout the supply chain.

Extended hours are not a cure-all for the congestion problem. But, with many experts predicting that congestion will continue until Chinese New Year 2022, any effort at improving the situation is welcome.

For some ideas on how to navigate California port congestion challenges effectively, check out Weber Logistics’ port congestion article from earlier in 2021. And if you’d like to learn more about how a true West Coast logistics expert can help you navigate this unprecedented situation, arrange a call with Weber today.